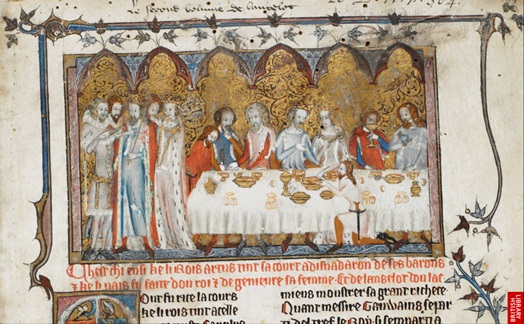 It was Christmas at Camelot, and there was the king with his leading lords and all his best soldiers, the famous company of the whole Round Table – celebrating in style: not a care in the world.  Again and again strong men tussled, and the noble knights jousted with vigour till they rode to the court to start dancing.  Celebrations continued the whole fortnight with all the feasting and pleasure that people could think of.  It was fine to hear such a glorious commotion: lively uproar all day and dancing at night…  With the change of the calendar on New Year’s Day the courses were doubled for the top table.  When the king and the knights arrived in the hall and Mass was over in the echoing chapel, the singing continued from priests and the rest, and ‘Noel!’ was called out over and over.  Then out they ran to bring in the presents, and, shouting greetings, the handed them round, excitedly arguing which were the best…  Delicacies were brought of the rarest foods in endless abundance, on plates of such number it was hard to find room in front of the diners to set down the silver that held all these dishes there on the cloth.  No one stinted them as they all helped themselves.  Twelve dishes to each couple, good beer and gleaming wine.  I’ll give you no more details about this rich feast; you’ll have got the idea, there was no shortage.

As the Green Knight makes his first appearance to the assembled court so ends the description of Camelot’s Christmas celebrations in the late fourteenth-century romance Sir Gawain and the Green Knight.  A fictional depiction it may be, but it must be imagined that elements of these luxuriant celebrations would have rung true with the contemporary noble audience.  In fact, certain elements of this celebration, particularly the food and feasting, still resonate today.

Preparation for Christmas in the Middle Ages, as now, started long before the 25th December.  But throughout the medieval period advent was a time for fasting.  Advent also marked a period in the medieval calendar for the slaughtering of animals, and preparing foods to last the winter months, an activity which features heavily in manuscript images for the month of December. 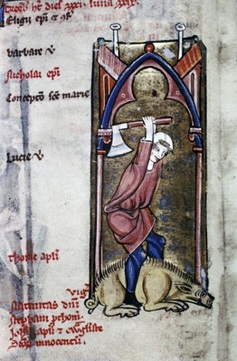 Christmas celebrations were also spread out for much longer periods of time, with even peasants celebrating the full twelve days of Christmas, up to the Feast of the Epiphany on 6th January.  For royalty and aristocrats, these celebrations might go on longer still, potentially extending for around forty days and the celebration of Candlemas on 2nd February.

But, after the advent fast, what types of food and drink were placed on the medieval table?  The household accounts of Sir Hamon le Strange of Hunstanton, Norfolk include the expenses for Christmas Week 1347.  These expenses cover the costs for Sir Hamon and his wife, Sir John de Camoys, Lady de Camoys and her maids, and Hamon’s ‘free servants’: ‘Richard the chaplain, the butler, the cook, with the groom, two boys, and one lad’:

Tuesday. Christmas Day.  For bread bought for the kitchen by John the cook, 1/2d.  For 2 gallons of wine bought at Heacham by the lord, 12d.  In store, 1 porker for the larder, price 4s; 1 small pig, price 6d; 1 swan from the lord John Camoys, price… 2 hens of rent.  And received from Gressenhall 6 rabbits, and 2 rabbits from John of Somerton as a gift.  Whereof consumed 5 rabbits and one ham.

Turkey for Christmas was, of course, out of the question as the bird had not yet been discovered in the Americas.  Thus various other birds (such as swan, goose or chicken) were consumed, as were pork and rabbit.  Interestingly, Sir Hamon’s expenses also include fish: from plaice at ‘1/2d’; to sprats ‘1/2d’; and ‘one kymp of herrings’.

The expenses, unsurprisingly, do not include any information on how these foods were prepared but the Curye on Inglysch, a collection of fourteenth-century English culinary recipes, includes a recipe for ‘cormarye’ (pork roast with spiced wine):

Cormarye. Take colyaundre, caraway small grounden, powdour of peper and garlic ygrounde, in red wyne; medle alle thise togyder and salt it.  Take loynes of pork rawe and fle of the skyn, and pryk it wel with a knfy, and lay it in the sawse.  Roost it whan thou wilt, & kepe that that fallith terfro in the rostyng and seeth it in a possynet with faire broth, & serue it forth with the roost anoon.

Cormarye. Take coriander, ground caraway seeds, powdered pepper, and ground garlic, in red wine; mix all this together and salt it.  Take the raw pork loins and flay off the skin, and prick it well with a knife, and lay it in the sauce.  Roast it when you will, and keep the pork that fall in the roast and boil it in a posset with light broth, and serve it with the roast. (own translation into modern English)

At different levels of the social spectrum the abundance of food would naturally have varied.  Christmas was a time when manorial tenants would pay their rents to their lord, and partake in a customary communal feast.   The copious and continued feasting of nobles would hardly be matched by those of lower social standing, however this was one of the few times a year that peasants would have eaten meat and even had a break from labouring so as to enjoy seasonal entertainments.

Medieval communities enjoyed an array of festive entertainment from games to music and plays.  Again, the types of entertainment on offer would have altered depending on social standing but the twelve days of Christmas were a period of frivolity for all.  To get an idea of the type of entertainment on offer in the late fifteenth century it is worth considering an extract the letter written by Margery Paston to her husband, John, on Christmas Eve.  In it she relates that Lady Morley cancelled a number of festive activities the Christmas after the passing of her husband, William Lovel, Lord Morley, (d. 26th July 1476).  It can be assumed that had she not been in mourning, these entertainments would have been part of the Morely’s annual celebrations:

… I sent your eldest son to my Lady Morley to have knowledge of what sports were in her house in Christmas after the decease of my lord, her husband; and she said that there were no disguisings [mask-wearing], nor harping, not luting, nor singing, nor any loud sports, but playing at the tables [board games], and chess, and cards.  Such sports she gave her folk leave to play and none other. (own translation into modern English)

Additionally, by the later medieval centuries, there was a tradition of ceremonially bringing a whole, cooked boar’s head into the feasting hall – thus combining feasting and entertainment.  It is unclear whether the boar’s head was seen as a delicacy or merely as ritual but by the early modern period some feasts replaced the real head with a wooden version.  The boar’s head would be brought in to the hall with a procession of costumed dancers who would sing a special song.  One version of this song was so popular that it was put into print in Wynkyn de Worde’s Christmasse Carolles of 1521:

A Carol Bringing In The Boar’s Head

The boar’s head in hand bring I ,
With garlands gay and rosemary,
I pray you all sing merrily,
Qui estis in conuiuio.

Be glad, lords, both more and less,
For this hath ordained our steward,
To cheer you all this Christmas,
The boar’s head with mustard.

While today’s Christmas entertainment, and foods, may differ from our medieval forebears it is clear that there are similarities in our festive celebrations too. Then, like now, it was a time of celebration and communal gatherings. Of course, the religious festival – the celebration of the birth of Christ – was of the upmost importance but then, as now, there was always time for a party as well!

This post was originally published 22nd December 2015 on Reading History.

CITED (in order of reference)

Find out more about my research at academia.edu